I got a bug

It’s been a long time in the making, but I finally found a piece of crap bug that I can restore! Normally a VW Bug costs about $1500 even though it looks like it’s been driven down the streets of Baghdad. Last night we found one that actually starts and doesn’t have squirrels nesting in the trunk. It’s not pretty by any means, but it’s in pretty respectable shape.

I drove it home last night – I did spend some time on the side of the road – but it’s in the garage with the Haynes car manual at the ready. It seems pretty solid so hopefully we can spend a year or two fixing it up and turn it into something nice.

It’s a 1972 Super Beetle with all the exhaust fume smell that goes with it! Right off the bat it needs some tailpipes! 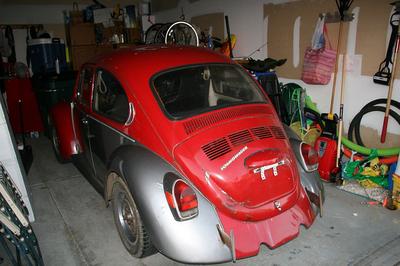