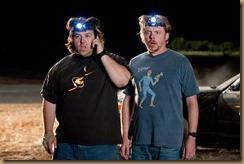 Jesus, what a weekend! We had more stuff going on than we’ve had in months! We started things off by going to see Paul. And it’s every bit the cliché you think it is. If you are a comic book nerd or alien chaser you are either going to love this or possibly be offended because it strikes too close to home. It has tributes to dozens of movies, books and TV shows. It even manages to work in some music from the classics sci-fi movies.

In case you hadn’t guessed, the premise of the movie is Graham and Clive find an alien near Area 51 which they have chosen to visit in their RV while on a Comic Book Convention holiday from England. But is the movie funny? That depends on who you are and what you’re expectations are. If you want a movie filled with cheesy B-grade humor, the type of movie two nerds would make about finding an alien in the desert and then running from the Men in Black then you will piss yourself laughing. It’s full of one-liners and touches every bit of nerd-dom out there. Even buying the samurai sword ripoff.

But if you live that lifestyle you might take offense.