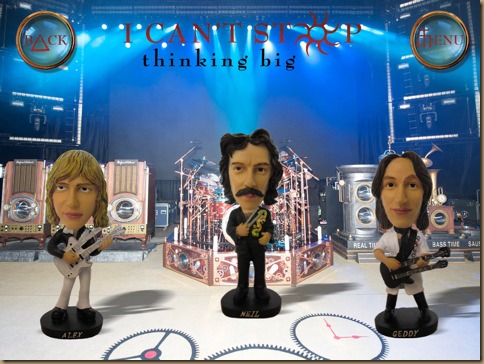 Looks like my Rush show is going to be delayed by a day. Normally that wouldn’t be a big deal at all. Of course better to move the concert and still play rather than just cancel the whole thing and go home. But, it just so happens I have a massive BBQ planned for April 2nd which will now have to be cancelled. And this is no ordinary BBQ, this is Death Sausage 3, the most dangerous BBQ in the world! 16 pounds of artery clogging, cholesterol fueled, calorie packed, bacon wrapped decadence stuffed into a smoker and cooked to perfection!

This was also going to be the day we break out all the homemade hooch and let people sample the swill we made in the kitchen sink. Hundreds of bottles of beer would be at the ready. Pounds worth of meat would be standing by just waiting to be devoured. But NO! We have to put that all on hold because the guys from Rush as feeling a little run down from this tour. Come on guys, you knew you were old when you started! It’s not like something changed in the last couple of days!

I only jest. I’m thrilled Rush is still doing the show. I can only imagine what doing a tour is like these days. Plus, the weather is pure crap right now. It’s damn cold and rainy so I’m sure it’s no fun to face that each night and try to have fun. Ironically we were on the verge of cancelling the BBQ anyway because of the crappy weather. I don’t think we’re going to hit the 70’s for Saturday and considering how cold and rainy it is right now, the BBQ spirit is just not there.

As my friend Don said, considering they’ve made me put Death Sausage on hold, this better be the best concert ever or I’m gonna throw down! You better play Lakeside Park or there will be hell to pay!!