As I mentioned, when I got back to a Windows machines I downloaded the very small (<5MB) Open Live Writer and let it install. As of right now, it’s a very stripped down installer, as in you don’t get to pick any options, but that’s no problem. It copied over just fine, presented the usual blog config dialog box and was up and running in just a minute. From there, it looks just like Windows Live Writer. In fact, if you have the two of them side by side, I doubt you could tell the difference. The layout is the same, the ribbon is the same, and all the buttons and drop downs are in the same place. The UI is the same from 2012 and hasn’t been trashed up to look like Windows 10 yet. Maybe we’ll get lucky and they keep it that way?

I’m quite excited over this project and think it’s a big step forward that a new build is already available and working. It’s been a few years since Live Writer was updated to keep up with all the changes in WordPress let alone any of the other blogs it was supposed to support. I’m sure the volunteer community has a lot of work cut out for them to get this to support the vast array of platforms that now exist.

To be honest, I really hope they don’t change Live Writer too much. I prefer the old UI and if gets updated to hook into the latest blog platforms, I’d be pretty satisfied. Oddly, I’m pretty happy with the current features and never really felt it needed a whole slew of new options added in. 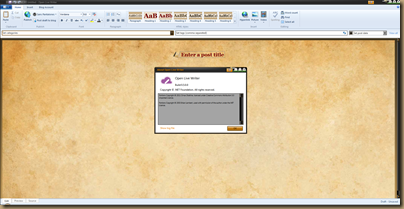