Not too long ago, Woot had a deal on a machine called the Shuttle SH67H3 which comes in a small form factor with a MicroATX case and looks like something that should be scooting along the floor in a Star Wars movie. At first glance it appears to be some sort of set top box used for browsing. But after a closer look, I saw there was a pretty hefty engine under the hood that made this a sassy, portable gaming machine. In a computer the size of toaster was an Intel I7 3770k chipset with 16GB of ram, 2 hard drives of 2TB each, a DVD drive and an expansion slot for a larger video card. It also included HDMI ports, USB 3 and 7.1 Surround Sound. Ok, wait a minute, this looks kinda cool!

After reading over the specs, I thought this would make a fine gaming machine for the living room. I have that AMD FX 8350 as my regular gaming rig, but what about hooking this up to a TV and playing racing games on it? It certainly has the horsepower, but a more powerful video card would make it better. With that, I got the machine for a very nice refurbished price and got an NVIDIA GTX 750 Ti card for just over $100.

Aside from some racing, I had the stellar plan of turning this into a full on media box. It has everything I need as far as power goes, just need a couple of accoutrements to round it out. I grabbed an LG Blu Ray player for $50 and by chance Seagate had their external 5TB drives on sale for right at $110. For the final piece, I added a set of Logitech 7.1 Surround Sound speakers, which I actually bought at a previous Woot sale. This is coming together very nicely!

The GTX 750 is a half size card and fit in the machine perfectly with plenty of room to spare. It’s still two slots wide, but that’s not an issue. The Blu Ray slipped right in and of course with USB 3, I have plenty of speed to write to the external drive. The big task was to copy over a few terabytes worth of movie ISOs and an equal amount of TV shows. All I can say is, faster than it would be using USB 2.

With all those pieces in place, I decided to take it for a spin. First order of business was to install Steam so I could install Insane 2 and Wreckfest. The GTX 750 isn’t the most high end card, but it had no problem with either of these games. I was able to drive like a damn fool without experiencing any stutters or lag. I fully plan to get behind the wheel of a Soviet military vehicle and crash through the tundra in SpinTires. Again, these aren’t the most demanding games, but they aren’t lightweight either.

For media playback, the obvious choice was VLC Media Player.

So when all is said and done, I have a black cube of a portable gaming rig that runs quietly, has huge amounts of hard drive space, plays racing games without issue and plays all the media I have on tap. That’s pretty slick!

Keep an eye out on Woot for the next round of sales, this little rig is well worth the price. 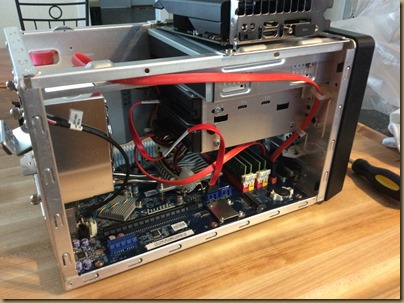 The Shuttle with the GTX 750 on top, 2 hard drives in the bay and a DVD player 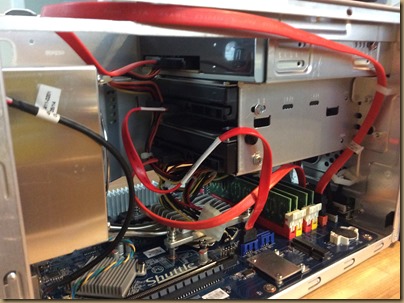