A closer look at SpinTires

When SpinTires came out as a Tech Demo, I was really excited about it. I missed out on the Kickstarter (thankfully), but picked up the game right at the end of it’s Early Access cycle. It had all the potential in the world to be something really unique. However, the final version removed all the features that made the Tech Demo so much fun. All the trucks were gone, modding had been cut out and you were basically left with driving around in the dark.

So the game wasn’t off to a good start and things seemed to get worse. All you had now were useless trucks that bogged down in the mud every few seconds so that you spent all your time using the winch between trees. That was exciting for an hour and then you were ready to throw things.

Then the dev cycle seemed to stop. No updates, no communication and the game pretty much languished, at least that’s how I saw it. I tried it a couple more times, but the camera threw my perspective into weird angles, the trucks still sucked and the mud was so damn thick that driving was impossible. Again, I threw it aside.

And just recently, another point of contention boiled over where it looked like the dev and publisher were at odds and the game was yanked from Steam. Then it popped right back without anyone saying a word. So what the hell is the deal with this game?

As I was going through the Steam Summer Sale, SpinTires came up and the reviews had tilted to being Very Positive. Something must be different, because when I threw in the controller, the reviews were scathing.

So, I decided to try it again. After all, it was already installed and updated. Turns out, things are much better. Modding support is back and the number of trucks you can download is pretty decent. But, even the included trucks are much better.

I took to the first map and actually had a really good time tearing along the mud tracks and crossing through the water. They’ve made it much easier to change trucks before you start a map so you’re not stuck in that damn Jeep looking thing.

I used a 6×6 semi and bounded through the mud, slinging crap everywhere. I was actually able to make progress and find different locations on the map. Of course, it’s still slogging through mud and still slow going, but at least it was entertaining again. I didn’t spend every minute trying to winch to a tree just to go 5 feet then repeat the process.

The "cloaking" or hiding of the map still feels silly to me, but with the right truck, it’s at least a reasonable task and doable. Before, I wasn’t able to cross the river and couldn’t reveal any of the map to see where I was. This time around, I not only revealed the map but actually completed the Objective. That still consists of finding the lumber yard and hauling the logs to the most remote part of the map, but at least you can auto-load the logs instead of picking them up one at time.

The return voyage can still be dangerous as hell with plenty of opportunities to capsize and dump the entire contents, but it’s nowhere near as bad as it used to be.

Overall, it’s vastly improved and not only did I complete the first level, I played around with several other trucks on offer from the Steam Workshop and ended up spending a few hours exploring the map, crossing rivers and removing the cloaking funnels. It was actually more like a fun four-wheel experience than a nightmarish chore.

Is the game perfect? No, the camera still behaves in an odd manner and there are other oddities like the truck whirling out of control when I used the winch on a trailer I had to ditch to cross a river. The trailer bumped into a tree then leapt off the ground, sending itself and the connected truck hundreds of feet in the air. Uh, WTF? Oddly, I got the 360 Achievement for rolling the truck. And to be honest, the relationship between the dev and publisher still seems strained.

With the current Steam Sale, is it worth buying? At the current price, no, not unless you have friends who love 4-wheeling. Then you have an arena for all sorts of shenanigans. But even still, the near $30 price tag is too high for what you get. The only objective is to gather and move logs and high-end titles like Project Cars, The Crew and Dirt are currently $15. However, the off-roading experience can be a lot of fun, but it’s clearly not Dirt 2, Dirt Rally or anything like that. This is a 5-10mph trek through sloppy mud, over damaging rocks and through hazardous rivers. That can be fun, but if there were more challenges like completing courses in a certain time, obstacle courses or the like, SpinTires would be quite enjoyable.

As it stands, SpinTires is a niche game, that has a decent community and a good amount of potential, but you have to be lenient and patient with the game. If you want to sling some mud and see just how far you can push an off-road vehicle, you could be entertained for days.

This 6×6 rascal can plow over some terrain. Trucks like this are fun to drive through the muck. The other “starter” trucks wouldn’t last 5 feet. 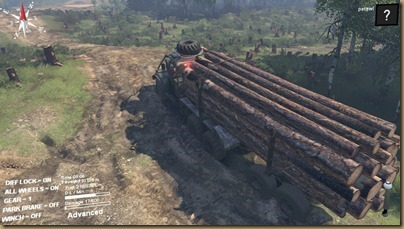 Since I can make progress, why not pick up some logs and see if I can make it up the hill without dumping it all over the road. 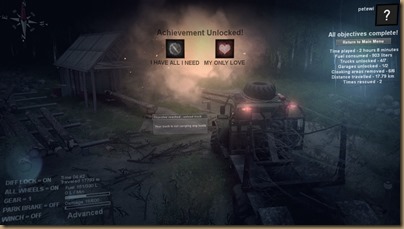 Gadzooks! I got an achievement!