They say time is relative to the developer. And it was about a year ago when I first read news of new RPG being created that would be heavily influence by Ultima and Diablo. Oddly, it was intended to be a mobile game and available at the end of 2015.

Well, that kinda, sorta, never really happened. Instead, the game was built for the desktop and it now available on Steam. However, it does an impressive job of keeping a price of a mobile game and is $9.99. And this is not some Flash based game, this rascal is a hefty 4GB download.

I hadn’t been tracking the release, so it coming to Steam was a complete surprise. Nevertheless, I immediately bought a copy. And after playing for a few hours, it’s an impressive game that does play like an Ultima from the days of old.

In typical style, I looted crypts and rifled through the pockets on my slain enemies. I amassed a hefty stock of junk weapons and sold them off to the first merchant I came across. With my new coins I bought plenty of rations to use in healing and bought cloth armor to replace my rags.

And in the same familiar sense, the goal is to gain XP and use those points to level up Strength, Dexterity, Intellect and Vitality. Those skill points are then use for the warrior with blades, the archer with ranged weapons, or the mage with wands. I chose blades and worked my way out of the first area called the Barrows and up to the main world. From there I gathered multiple quests, found all sorts of new weapons and explored several of the areas.

For anyone who played the older Ultimas, you will be familiar with the idea of getting out bedroll to camp and restore your strength and vitality. You will so be familiar with the simple combat mechanics. There is ridiculously complicated skill tree or the idea of min/max skills. You apply points to the stat that benefits you the most, Strength for melee, then go find or buy the most badass weapon you can. There are weapons "of Tormet", "of Smiting", "of Quake", "of the Bull", that give different special bonuses, combat moves or healing.

There is also some crafting such as cooking meat, fish and chicken to sustain you on the long journey. These have to be cooked over a campfire before they can be consumed, so have to think ahead just a bit.

There are the usual encounters with bears, wolves and stags so you can gather hides and make clothes, or sell them for money.

Like the old Ultima series, you will have companions to help you out. You start off with one, but as you progress, others will join in the quest.

You interact with plenty of people and decide how you want to handle those encounters. You can take the combative approach or the compassion approach.

Ember is a single player adventure game that I’m quite taken with so far. The mechanics are simple and understandable. The main focus of the game is exploration and interaction. The combat is click to attack, but mixes in special abilities you activate to keep things interesting. You activate them for the other party members as well.

I’m amused by the crafting and the ability to craft your own items. You get basic cooking, but there are recipes for making healing and energy potions. You can also make weapons and other items. As you move around the map you will see harvestable items like Sage and Copper Ore. And in dungeons you will find different reagents.

I’m also thrilled that a game of this scope and quality is a mere $10. In this age where games hit the store with a price tag of $60, whether it deserves it or not, it’s nice to see a game that you can take a chance on without emptying your pockets and becoming a pauper.

Finally, Ember is a game you can play for a few minutes or few hours. For those that remember, Ember uses save files, so it’s always best to save the game often, especially before a big encounter so you can go back and do it again if things go sideways. You only get three slots, but I save like a fiend every time I come through a scrape or find something good.

For those that liked game like Ultima 4-7, the original Diablo, and other more casual RPGs, Ember is an impressive game with lots of fun. It has a nice momentum to it, without having to grind relentlessly to build your skills. And there are plenty of quests out there to keep you busy.

It’s a highly recommended title and for $10, you absolutely can’t go wrong with it.

A copper vein out in the world. Copper can be used for weapons. 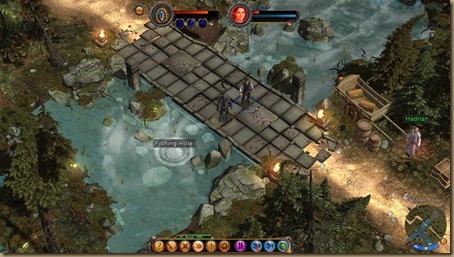 A fishing resource. Good thing I found a fishing pole while rifling through the pockets of my fallen enemies 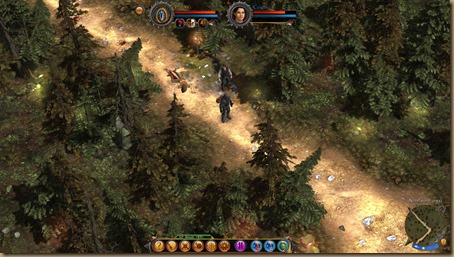 A bandit road with some slain bodies. Those were like that when I got here. 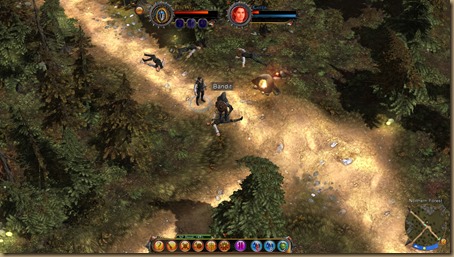