How To Create a Ram Drive Using Keyboard Maestro

While it may not be common on most computers, I am a fan of using a RAM drive. For my work Mac, this is where all my music plays from. I also play desktop videos such as beach scenes to create a festive atmosphere. I use the RAM drive to save wear on the spinning disk. Although I have a 3TB data drive for the purpose, there is no reason to play 8 hours of music, all day, every day, from a disk when memory is more efficient.

In order to create a RAM drive, you need a lot of RAM. Setting one up on an 8GB machine will lead to tears. Lots of RAM is one of the reasons I love these older model Mac Pros. I can allocate 6-8GB of RAM without issue.

Although it’s a rarity, when the Mac needs to reboot, such as a security update, the RAM drive disappears. After the reboot, the RAM drive has to be recreated and the files recopied. Not a big deal, but why do it manually? Another task easily handled through automation with Keyboard Maestro.

Through Keyboard Maestro, I can prompt for the size of the RAM disk, create it, then use a shell script to copy over my list of files. I use a script file for ease of editing in CodeRunner. The script can be written in the Keyboard Maestro code block. 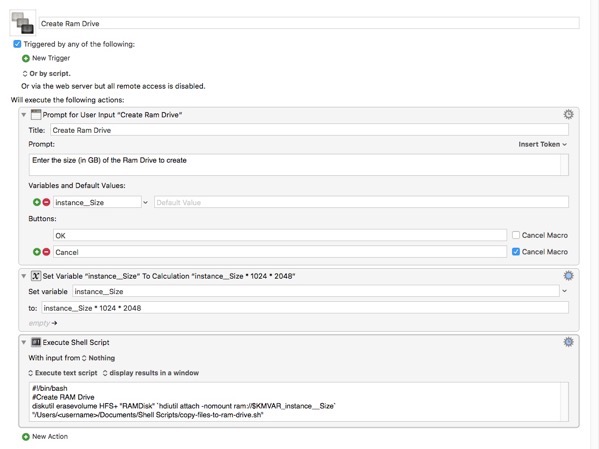 What’s good about this script is it shows a Prompt for User Input block, then uses that response in the Shell statement.

The value for RAM drive size is stored in the variable: `instance__Size`
This is used in the Shell Script by prefixing `$KMVAR`, as in `$KMVAR_instance__Size`

This is an effective way to build a UI in Keyboard Maestro, and combine it with the power of the Shell.

The RAM drive is created using the `diskutil` command within the `Execute Shell Script` Action.
The Volume size is calculated using – `instance__Size * 1024 * 2048`.

The complete command is shown in the `Execute Shell Script` block:

The next command in the block calls the shell script to copy over a dozen files for several hours worth of music.

A playlist file based on the contents of the RAM drive is also copied over. Double click this and the files load into VLC.

Now everything is back to the pre-reboot condition. It’s all handled behind the scenes by triggering the process with a keyword. I don’t have to open iTerm, enter the command, then run the shell script manually.

Handcrafted with care just for you.