When one Death Sausage isn’t enough!

Creating just one Death Sausage is far too easy. Even creating two is indulgent but is easily achievable. When you want to push the limits of gluttony and bacon tolerance, you make five Death Sausages! That’s right, five!

I thought Tracy and Brian were making a single DS with multiple ingredients. They were in fact making two separate rolls each with different ingredients. They combined bratwurst and shredded pork to their offerings and snuck in some other ingredients before rolling it up. All totaled we had nearly fifteen pounds worth of meat products at the ready that went into the smoker. And as you can see from the pictures we had plenty of smoke going.

The Death Sausage takes a little over two hours to cook, and considering how many pounds we had in there we were cooking for several hours. But make no mistake, they were damn good!

Theo went with a more classic recipe, but used his own blend for the dry rub and added plenty of garlic cloves. Mine was on the spicy side because of the Andouille sausage and spicy mustard. Tracy and Brian came up with a good one using pulled pork and bratwurst. The flavors and textures mixed together very nicely. Quite frankly each one of them was delicious! Not to mention that we had plenty of potato salad, chips, dips, cookies, brownies and Corona. This was perhaps the most decadent BBQ I’ve ever been witness to!

Please feel free to leave your envious comments and bask in the glory of the Death Sausage! 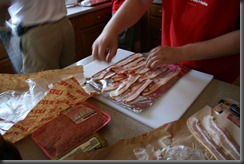 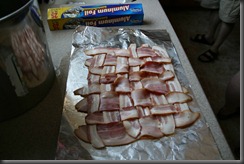 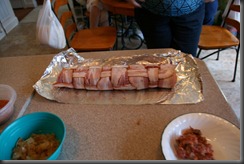 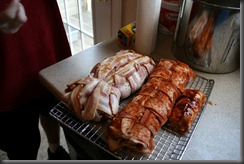 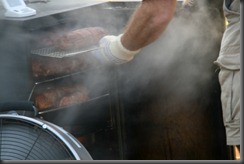 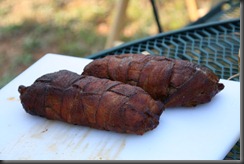 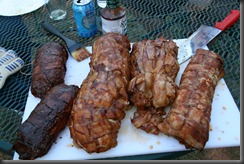 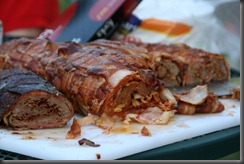