With all this talk about Process Lasso, I decided to download a copy and give it try. First things first, despite what so many people say, Process Lasso is NOT FREE. Like other "shareware", it’s free to TRY for 30 days. It keeps working after the trial period, but a majority of features are disabled and plenty of nag screens will pop up.

That aside, Process Lasso is a tool built to tame your CPU and improve performance as well as invoke a Game Mode that gives your game a higher priority. All of this is to give a smoother and more responsive gaming experience. So does it work?

My goal was to beef up Shroud of the Avatar, which is in Early Access and hasn’t had any optimization done. This test was to see if any improvements could be made by boosting the executable and lowering the priority of other processes.

Right off the bat, Process Lasso offers a vast array of information about the processes running, memory usage and gives you the ability to change priority and processor affinity. While it’s not a Task Manager replacement, it presents a lot of good information.

One of the main tenants of Process Lasso is to improve overall CPU responsiveness, meaning if a process starts getting out of control, the tool will lower the priority and make other adjustments to keep the renegade program from consuming your machine. If you watch your machine long enough, you might notice you already have an app or two like this. If so, you can see Process Lasso make adjustments in the output window.

There are plenty of other features such a keeping a program running even after it crashes, terminating an app if it tries to start up, attempt to trim memory if the app goes over a threshold as well as limiting the number of instances a program can spawn. All of these are pretty good features and for those that want to dig in, there is a lot to tinker with.

The UI however is frustrating. To change the processor affinity from 8 cores down to 4, requires going through the menu system 4 times, each time unchecking a core. This is tedious. The same method has to be used through all menus which means really getting into some serious tuning will also mean a serious amount of clicks.

After making a few simple adjustments, I loaded SotA to see if I had any improvements. Everything felt fine and things worked smoothly. SotA was already in DimmDrive and I had previously tweaked my settings with Core Tuner (which was then turned off). In the end, the experience was the same as it was before, meaning, yes Process Lasso works (although I have no numbers for you), but it works the same as apps that are half the price.

But Process Lasso is interesting to watch run to see what services and apps keep vying for CPU time. I noticed I have several background threads that could use with a bit of tuning. So overall, Process Lasso is pretty neat and does offer a lot of knobs and dials you can tune. Or you can let it use it’s own defaults and adjust on the fly. Really, the only complain is the UI is a bit cumbersome and the price is a little high for what you get. 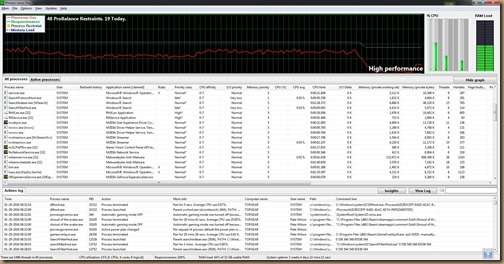 This is output from my gaming machine. There is a lot of cool information here, and SotA worked the same as when Core Tuner was running. It worked fine and SotA had no issues, but in my mind, Process Lasso offers core features I have in Core Tuner which cost me $6. Sure, Process Lasso will let me dig deeper, but that’s not really what I need. It’s a good app, but the UI can be tedious and the price is too high. If I could pick up a copy for $20 or less, I’d do it, until then, Core Tuner works just fine for me. And my biggest improvements have come from DimmDrive.

By the way, you can use this giveaway link to get a working key for Ashampoo Core Tuner 2 and compare them for yourself.