For Father’s Day I decided to throw caution and calorie count to the wind and make a dinner that would instill both awe and fear to anyone who happened to gaze upon it. That creation now goes by the name Death Sausage and I will admit here and now that this is nothing more than an exercise in decadence and gluttony. But oh my, it was worth it. After fully assembling this beast I had 9 pounds worth of ingredients wrapped together. 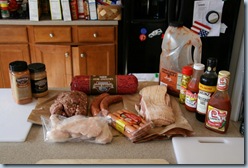 To start off with, here is my bevy of ingredients. If you’re interested in trying to make your own here’s what I used:

Various sauces and spices such as BBQ sauce, and bacon flavored seasoning salt. 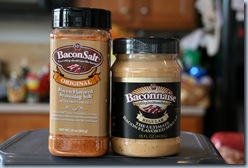 And this is where the fun begins. Taking some inspiration from the infamous bacon explosion I spread out the ground beef, layered the country sausage on top, then made a bacon weave on top of that.

With that completed I piled on the andouille sausage, hotdogs and chicken strips. This was then covered in more sauce and spices. 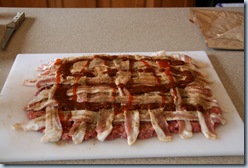 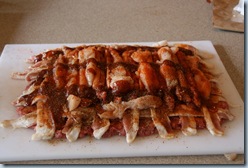 Now it’s time to roll this up in a loaf so it can be put on the grill. It’s not as easy as it sounds and my son and I had to work together to get it roll up correctly. I probably should have put some cooking spray on the cutting board we used since it was sticking a little bit. But have no fear, with a little ingenuity and a chef’s knife we got it to roll over. Now it was time to wrap the outside with bacon. We wrapped bacon around the edges and over the top. The bacon makes a nice little outer shell. 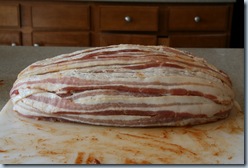 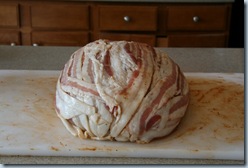 Death Sausage is about complete. It’s now ready for the trip to the BBQ and the final addition of sauces and spices.

I put down a piece of foil on the grill, sprayed it with non-stick spray then slide the whole thing onto the foil. It practically consumed my little grill and went much further from side to side than I anticipated. 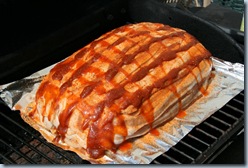 I really should have wrapped the whole thing in foil. I eventually did, but not before some wicked flames charred the outer shell of bacon and made an impressive grease fire. Nothing says fun like your son standing at the back patio door pointing at the grill saying, “I think we need to check it” as the smoke billows out. This is normally done in a smoker due to the high fat content, but since I don’t have I had to blaze my own trail.

Nevertheless, about 2 hours later it was ready. Here is a shot of the cross-section with all the meats exposed. 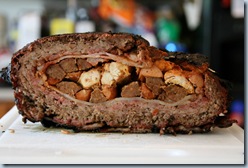 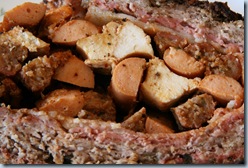 Yes indeed that’s sausage, hotdog, chicken and bacon in there. It’s a festival of BBQ in every bite! And yes, it was good and incredibly filling. My boy who normally eats four hotdogs as a snack was bested by this beast. I did give him a pretty healthy portion so I can’t fault him there.

So there it is! My Father’s Day masterpiece in all it’s glorious 6 meat goodness! And just in case you were wondering the Death Sausage packs a calorie count somewhere in the neighborhood of 10,000 – 12,000. I didn’t get the exact calorie count of everything so I could be a little off here and there, but you get the idea. Clearly, you don’t eat this alone.

You may be asking yourself, but wine do I serve with it? I recommend the Australian Benjamin Port. It’s goes down smooth and easy with this faire.