It’s got the word Zombie in the title, I had to have it!

DESCRIPTION
ZombieSmash! is a “Survival Comedy” game, featuring undead-themed castle defense and entertaining, physics-based gameplay. The game casts players as Joey, a lone survivor pit against a herd of writhing, unrelenting zombies – to defeat the undead masses, players must use their fingers to flick and smash them until they’re un-undead.
• To aid players in their fight, over 20 specials and upgrades allow for creative zombie demolition – including fun implements like asteroids, wrecking balls, liquid nitrogen and a gigantic, rolling boulder – combine specials (for instance, smash nitrogen-frozen zombies with a boulder!) for added hilarity.
• Sophisticated ragdoll physics produce unique and hysterical zombie deaths, and the proprietary SplatterEngine™ renders adorable cartoon blood and gore in a convincing and entertaining fashion.
• Three game modes provide limitless replay value:
o Campaign Mode challenges players to survive for 31 intense days against the mounting zombie threat.
o Endless Siege Mode confronts them with a never-ending zombie assault – hold out as long as possible, racking up an ever-rising body count.
o Sandbox Mode gives you all the tools to rain destruction down on those stinking, moaning zombies without any of the peril.
• Social features including Chillingo’s Crystal and Playhaven for online and community support, and the ability to share screenshots of your best ZombieSmashing moments!
• Original soundtrack produced by famed game music composer Chris Hülsbeck, the talented musician behind the scores to classic games like Turrican, Giana Sisters and the Star Wars: Rogue Squadron series. 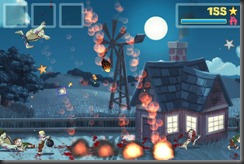 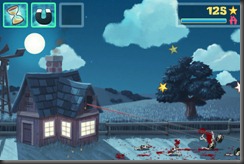