This time last year I put together the Death Sausage. Last month, Theo and I did a beta test for the Bacon Explosion. Today, a new Death Sausage has been created and is waiting to be placed in the smoker. For this creation I used:

Hot dogs and chicken strips were kept out of this version. However, this isn’t the only Death Sausage in existence. Theo has also created one which will be going into the smoker today. His creation uses:

And if that wasn’t enough there is a third Death Sausage which will be created later this afternoon. Tracy and Brian are putting this one together, but the list of ingredients is a secret known only to them. I know there is bacon in it, but the rest remains a mystery. They’ll be assembling their Death Sausage once we get from the brewery. We’re kicking off the festivities with a trip back to the Carolina Blonde brewery so we can fill the growlers and hang out for a few hours. Then we’ll reconvene, for the cooking of 15 lbs worth of meat and full contact horseshoes. This is gonna be one hell of a day! 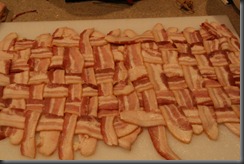 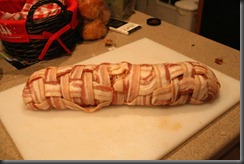