Rush – What a night! 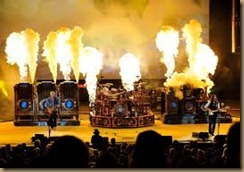 We got to Greenville way early. Everything said it was going to take nearly two and a half hours to get there but we seemed to get there in about an hour and a half. Concert starts at 7:30, we were there at 3. Not sure how we messed that up so badly.

But we did find this fantastic little coffee shop that we spent several hours at. Now I’m not really a fan of coffee shops. They are just too beatnik and overpriced for me but I really liked this place. It looked like someone’s basement with chairs and tables scattered around. There were bookshelves all over the place and some simple paintings. It would have been great to decorate the old basement like that.

We took a seat around a small coffee table, ordered a milkshake and just hung out and talked. The place was so calm and so mellow that I was reluctant to leave. I don’t know what music they had in the background but it was light and pretty quiet – something that’s there is you really listen for it, but otherwise it hides itself. People had laptops and books and sat quietly reading. I haven’t been to a place like that before but I was completely taken with it. I was sorely tempted to get another milkshake and just hang out for the night. Don and Durn got some dinner which they said was really good (some variations on a salad). I was still full from the burger. Too bad it’s so far away I would be happy to go back there again.

As we drove into town, I’m pretty sure we saw all the tours buses and I swear we saw Neil’s bike.

The concert itself was amazing. For a last minute purchase the seats were pretty good. It was another nice stadium like last time, enclosed with air conditioning. Plus, I love there is no smoking in there. Once the music started I was off in my own little world. I stood there and tried to take in every movement, every trinket on the stage and every image that flashed on the screen behind them. Considering how much is actually going on during the show that is a hell of a lot to take in.

And just like before they played brilliantly. They seemed just as energetic and lively as ever. If anything they may have been more fired up than before. Geddy did some guitar work that was just insane. He did a little bass solo and the focus was on his hands. I know nothing of guitar playing but damn that looks unusual. The way he places his thumb between the strings and picks and bends the strings just doesn’t seem normal. If it is normal it looks wickedly complicated!

Rush played the classics like Freewill, Limelight, 2112, La Villa Strangiato, Working Man, Subdivisions and dozens of others. We dipped into Snakes and Arrows and Counterparts for a moment or two. Really the only one I wish they did include was Red Sector A. That has always been a favorite. Durn and Don took plenty of pictures and even though Don had to sit down a lot he said he really enjoyed it. His allergies or perhaps a cold were beating him down.

Alex was his normally goofy self with wild hand gestures while playing, his scary face and walking around like Frankenstein. He and Geddy seemed to be having a hell of a time. Right in the beginning they were laughing and talking while playing away at a furious pace. That to me is just amazing. The songs are inanely complicated and they have the presence of mind to step back and have a discussion while 10,000 people look on.

By the time the second half started Alex seemed even more animated. He was doing more silly things and even Geddy was dancing around more and hopping all over the stage. What the hell is that little shimmy he has going on there? So damn amusing.

After reading the books and listening to music all these years I just have to stand in awe of those three. Most people don’t explore the talents they have. Most people don’t have relationships that last a decade let alone three. They don’t get to indulge in doing what they love and make a living at it. Rush has done this and so much more. They’ve grown up together. They’ve made money together. They’ve had kids and watched them grow up. Sadly they have even lost one. But they been together for yet another newborn. Not only does Rush make fantastic music and entertain with energy and mastery they have stayed friends through all these years. And not just friends because of the band, but real friends who actually like being together.

Alex and Geddy go on wine tours and play golf. Alex cooks for them. They have holidays together. It’s truly amazing. It’s inspirational in many ways. Marriages don’t last that long these days. I can’t say I have any friendships that come close to lasting that long. I’m jealous of their friendships. I’m jealous of their talents. I’m jealous of the places they’ve been and the experiences they’ve had. But I’m also glad I’ve got to spend the last 20 years with them. They have been a part of my life since I was a teen in college. I have been inspired and saddened by their music. When I look back over the decades Rush has always been in there somewhere.

I loved being in that audience. I loved being there with Don and Durn. Just like all the other times it will be a highlight in my life.

There were some odd observations during the show though. At point we seemed to be amidst a toxic waste spill. Something happened a row or two behind us and multiple event staff converged on the scene with buckets, cans of what looked to be Ajax, mops, brooms and all manner of plastic gloves. Durn and I thought we’d been exposed to anthrax. We think someone got sick and threw up. It was all contained but my goodness it was a flurry of motion. But what the hell? It 9 at night? Who the hell is that drunk at 9? At a concert? You must be a special kind of stupid to pull that one off. You’re either pounding the drinks down like a madman or you’ve been drinking all day. Either is cool, but what are you doing at a concert? Go home and get drunk in the living room where it’s safe. What is this crap of going out and throwing up all over the seats? Have some dignity.

And then there was the guy who was escorted out of the floor level, by force. I saw some guy in a white cap heading toward the stage with great determination. Hot on his heel were several security officers who then manhandled him back to the sides. He was then tossed back up the stairs and let go. I have no idea what the hell happened or what he did but he was dealt with sternly and removed quickly. There shall be no mischief at the Rush show.

But what a night! Funny thing is, they have a concert tomorrow night in New Orleans. How wild would that be? Go to a Rush concert on Friday, stay the night and go to town on some Cajun cooking the next day. That sounds like a hell of a weekend!