Ok, this isn’t the first beer we’ve ever made, but it was the first beer we ever bought. And for some reason we have snubbed it and passed it over for the past 6 months. It was the "backup" kit to the Nut Brown Ale which we swore would turn out to be dreck and would have to be thrown into the toilet thus we had a another kit at the ready. And that kit has been at ready for months and months, always skipped over. It’s like Cinderella, never quite invited to the ball.

But we made amends and put the Evil Summer Wheat into the hopper. It’s going to be a sweet beer since it has a big packet of honey.

And here it is in the carbuoy. The brown is a little unusual I have to admit, but we’ve made plenty of brown beers before. I feel bad we’ve neglected this one for so long, hopefully it will come out well. 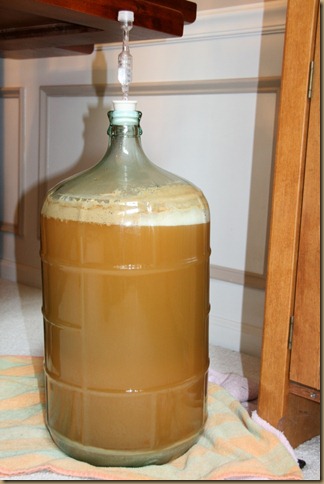