A few weeks back I decided to fly solo and make a beer on my own. This may not have been my best decision but I did it anyway. My attempt was the Outback Aussie Ale – an auspicious selection that turned out to be an ill-tempered child with behavioral problems. Well, it is Australian (so to speak) so of course it will be difficult and dangerous.

It wasn’t hard to make but it didn’t settle in the Carbuoy. It was full of vim and vigor and soon blew through the airlock and was spewing all over the floor – much like a real Australian. I spent the next day constantly replacing the airlock with a clean one. I figured this probably contaminated it and tainted the goods.

Theo was good enough to come over and bottle it with me and he thought it smelled a little off. I didn’t notice that but perhaps I was blind to its shortcomings. But we pressed on bottled it anyway (what the hell does "goaty" mean?). And we didn’t use just any bottle, we filled the big 1-liter bottles. A hostile beer needs an appropriate vessel.

Well last night I cracked one of them open and braced myself for the results.

And there was nothing wrong with it. It tasted like a normal Ale. I’ll admit it’s not an award winner or one of the best beer we’ve made but it’s perfectly drinkable. It tastes like a decent ale and doesn’t show any signs of being the dunce of the class.

I have to say, I’m pretty excited with myself. I made a beer all by myself and no one’s going to get food poisoning from it. That is high praise indeed! 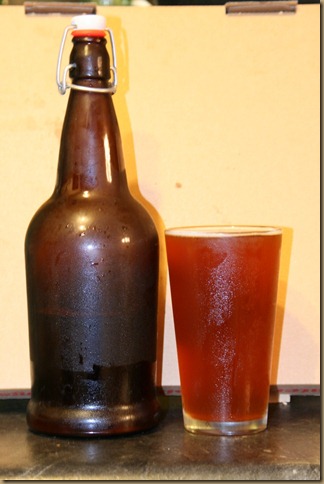