Time for some strong Ginger Beer

It’s the start of a long weekend so I’m making some hooch. I’ve had the kit for Ginger Beer for at least a month and I’ve been really anxious to try it. The American Hefeweizen, Belligerent SOB and Outback Aussie Ale are all done, so it’s time to put this one into the carboy.

This kit looks and smells really interesting. There is a bag of ginger root that gets boiled into the wort. There is also an aromatic and finishing hops. The grains smell more like coffee than anything else and after the full cooking time it smelled like a coffeehouse.

This beer looks really dark, much more like a Guinness than anything else. As you can tell by the picture of it going through the mesh, it’s a big chunky. The ginger root makes it look like this beer has floaters. I bet one straining isn’t going to get all of those out of there.

After just a few minutes of being in the carboy you can see it separating out. It’s got a pretty thick layer forming at the bottom.

In the final picture you can see the fermentation well under way. It’s got a pretty thick head on it and there is lots of stuff still floating around in there. 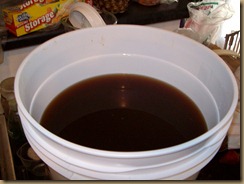 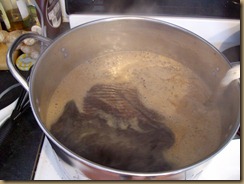 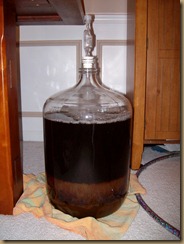 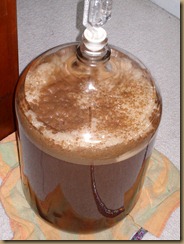