So there it is, all the levels, all the monsters and all the stars have been defeated and completed in Letter Quest: Grimm’s Journey. I have to say, that is a pretty sweet little game. I’ve got around 18 hours of gameplay invested and I’m very satisfied with the game.

Things start off easy with defeating a single monster, but then it gets more complicated with upgraded armor, health potions, dodge ability, plague tiles, whirlwind tiles and the treasure chest rounds. Not to mention a race against the clock in timed rounds and massive boss monster that only take damage under tricky conditions.

I suffered some terrible losses, but also some stunning victories. I think the time rounds were the hardest. Going through 5 monsters in less than 3:00 minutes is nerve racking.

Overall, it was great. I know it’s been out for a while, but I just found out about it and jumped right in. Now that I’ve completed it, I’m not sure if I want to unlock the Premium content – tiles, weapons, and another character, or go back and just beat the stuffing out the monsters again.

Either way, definitely one of the best word games I’ve played. If the Steam version goes on sale, I will pick it up for that platform as well. It’s simple, but challenging and has just the right amount of tension to make it worthwhile. 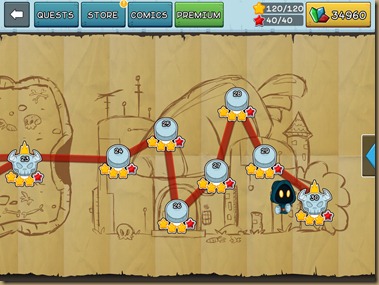 With the gem doubler add-on purchase, I managed to get all the upgrades for weapons, armor, dodge, potions, extra gems and other treasures and still have a slew of gems available to spend. I had a lot of fun with this game.