Switching from Windows to Mac OS – The Hardware

Buying a Mac is actually a tricky affair. Because of the expense, my first thought was to build a Hackintosh. I love the idea of it, but it requires some specific hardware, some specific procedures and a bit more dedication to the cause than I’m willing to give. And, if I needed new hardware, I would rather get a real Mac and know full well it works.

But where to start? Any machine would need to have at least 8 cores and 32GB of ram. That’s what I have now and anything less would be a step back. I also need to add quite a bit of hard drive space. That eliminates the Mac Mini.

The iMac, especially the new one with 18 cores, meets the power criteria, but lacks the hard drive capacities and the price tag for that model is in the stratosphere.

The MacBooks are nice, but it doesn’t have the cores or ram, and I’m not keen on having a laptop as my main machine.

It’s down to the Mac Pro, but, with a catch.

The current Mac Pro is impressive, but, you need to think ahead on the hardware you want. However, the previous generation of Mac Pro still has a few tricks. The innards of that big aluminum case contain hardware that is powerful and expandable.

They aren’t produced anymore, but they can easily be found on eBay. Once I started looking, I found the Mac Pro of 2010 and 2012 are far more powerful than I ever imagined. When completely loaded, they support multiple processors with multiple cores per processor and can be fitted with huge amounts of ram and high end video cards.

After comparing prices and specs, I decided to go all-in and bought the biggest machine I could find, which crushes what I have now. It sports 2x 6-core processors at 3.54 Ghz, 128GB of ram, a 1TB SSD main drive, a 1TB data drive, and a staggering Nvidia Titan X video card with 12GB of ram. As a gaming rig, it would set your hair on fire.

But, this will be an application workhorse, so with 128GB of ram, I will create virtual machines bigger than my physical machines. I could also make a massive ram drive so as to stuff dozens of programs into pure memory.

The Titan X won’t be used to it’s full capacity, but it supports multiple monitors and my video won’t lag for years to come. And I’ve already added two 3TB hard drives for more data storage.

It could be overkill, but it has some brutal power. Apps take mere seconds to install and switching between them is near instantaneous. Plus, apps will never starve for ram. When the day comes to retire it out, it will make one hell of a media or web server if nothing else.

I consider it an acceptable upgrade. It goes beyond any Hackintosh or Windows based machine I could have built on my own or ordered for anything close to the price. It will be some years before a machine comes along that has big enough specs to make me upgrade. From here it would need to be 18 cores and 256GB of ram. 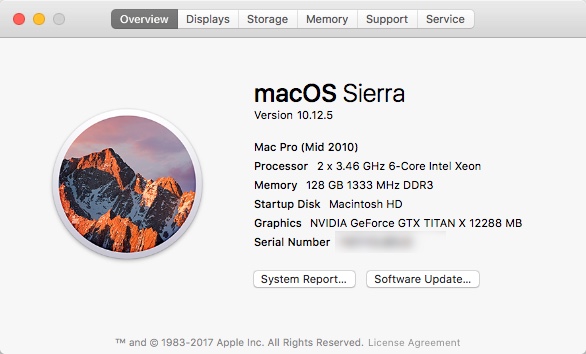