Calling Another TestCase in Katalon Studio

One of the many great features of Katalon Studio, is the ability to call other test cases using the CallTestCase command. 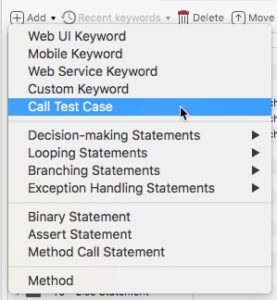 This would make the test case act like a procedure, where it can be called to execute a series of steps, then return to the main program after the work is done.
This means the automation code can be more modular, more dynamic and with the right planning, far more code can be reusable.
I’ve started to bring this into my own tests as seen by the example of reading the tabs of the customer profile. Here is another example to toggle the status of a user.
I made two test cases, one to “lock” a user and another to “unlock” a user. I can then read the text of the button and call to the appropriate test case.

A test case can also take parameters when it’s called. If you had another test case that acted on a Name and ID, those would be passed as part of the command:

By using CallTestCase, test cases can be called when needed, not just in a linear fashion. This means they can react to what’s on the page and skip over tests that aren’t applicable. A test can be written once and used multiple times.
As another example, I have a contact generation test case. We have several Contact forms and instead of putting the same text in over an over again, I created a test case that uses Lists, text parsing and random numbers to generate a somewhat unique user details.
I have a list for first names, last names, company and state. I use random numbers for the zip, phone, and street number. When called, a name, address, phone, etc are generated and assigned to the Global Variables I have defined for the project.
It would have code like the following:

To create a new user, I call the Contact Generation test case then set the text of the input fields to the values of the variables. It works quite nicely.
As time goes by, I will try to use the CallTestCase more frequently and work to my test cases more modular. It’s already starting to happen in a couple of places and it’s a very powerful tool.

Handcrafted with care just for you.