Topping out with a Trillion Dollars in Crime City

Well, I figured this day was eventually going to come around. There was sort of no way to avoid it. Over the weekend, I topped out my bank account at over $1 Trillion dollars and have a current IPH of $393.7. Others have done the same thing, but I figured I would showcase this silly little achievement.

I also think this might also be a good time to step away from Crime City. While it’s amusing to generate the cash and put up the buildings, the game has sort of run it’s course. We’re in a cycle of doing the same thing over and over again. The new events are just a rehash of old ideas and it’s nothing but Syndicate events. We’re basically going around in circles and I haven’t finished any of the actual Solo goals in more than a year.

With that, probably time to put this away. Maybe I’ll keep putting up the LTBs or maybe I’ll just let my buildings sit out there stocked with cash so others can have the great glee and satisfaction of robbing them.

We’ll see what happens, but my time spent in the game will be pretty minimal now. But just to ask, anyone else stockpile a trillion in cash? What else are you doing in the game? Where do we go from here? 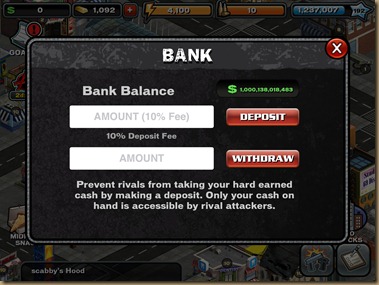